I've taken a few trips to visit the castles in the Paris-area and the Loire valley. Let's take a look! 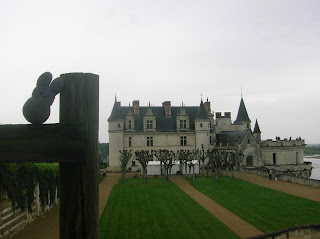 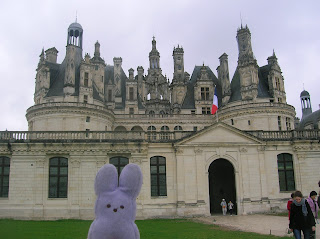 Chambord, which was designed by Leonardo da Vinci and served as the model for the castle in Disney's Beauty and the Beast. 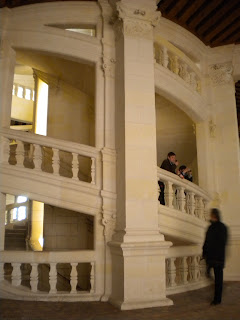 Naturally, being a Leonardo creation, it had to have a funny yet amazing quirk. This is the best shot I could get of the double helix staircase that winds up the center of Château Chambord. It's funny to walk up the stairs and see your friend on the other side yet never be able to reach each other. There may or may not have been a race involved. 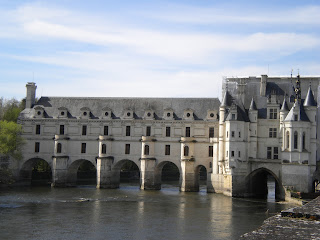 Chenonceau, nicknamed "Château des Dames" due to the famous women, including Catherine de Medici, who used to reside there. This is the River Cher that runs under it. Of the castles I've seen, this one is by far the most memorable and beautiful.
Posted by JayJay the Bunny at 2:00 PM No comments:

Who comes to Paris for falafel? Well, you should, because it's better than any I've had in the US. There's one place that's the most famous: L'As du Fallafel. Google "best falafel in Paris" and you'll find oodles of pictures and recommendations. So I've made this my Thursday afternoon tradition. 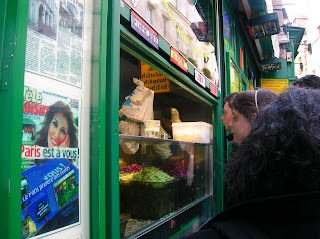 They make this stuff at the speed of light because there's always a line down the street waiting. 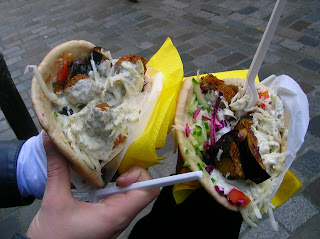 Ah, the finished product! Falafel, eggplant, tomatoes, cucumbers, red cabbage, tahini, and humus in a pita. You can get picante (spicy sauce) if you want. And I always want. Sometimes my enthusiastic responses prompt them to add more; I have no problem with this.

But then again, there's always the #1 competitor directly across the street, Mi-va-mi. They seem to have a friendly rivalry. Though both claim to have the best falafel in Paris, Mi-va-mi's line is never nearly as long as L'As du Fallafel's, which can be a blessing if we're short on time. The only real difference between the two places is the addition of an extra salsa on Mi-va-mi's part. It's mild but welcome in my case, though many people may get bogged down with so many tastes crammed into one pita. 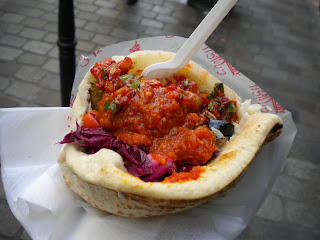 Overall? I'm going to miss this when I get home. I'm going to have to do some serious hunting to find all my favorite authentic Mediterranean food.
Posted by JayJay the Bunny at 1:42 PM No comments:

Email ThisBlogThis!Share to TwitterShare to FacebookShare to Pinterest
Labels: food 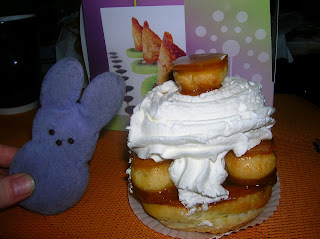 Sainte Honoré: custard-filled pastry with crunchy caramel, topped with smaller pastries and my weight in chantilly. 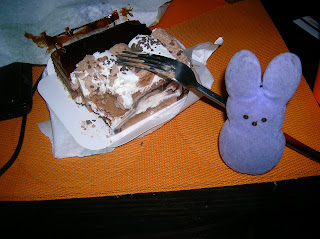 Black forest cake and Opèra. We couldn't wait for me to take the picture before we started digging in.


Posted by JayJay the Bunny at 6:43 PM No comments:

Why my life sucks

I'll tell you a story. This actually happened last week, but it's taken me a while to get over my initial infuriation over the matter.

So I'm walking home between classes and about to open the front door that leads to the long courtyard in my building. The little convenience store directly next door is experiencing some turbulence, my curiosity is caught, and I pause to glance over. Wrong move. I never found out exactly what was going on, but I suspect a robbery because the shop owner was being restrained by two other men while furiously spraying something white at a man who took off running down the street. Now, me being but several feet away and downwind from all this, it became apparent that the white gas was pepper spray. I think it was the incapacitating burning in my eyes and throat that tipped me off. I stabbed the door button and attempted to force the automatic door to open faster before bolting inside, making quite the scene as a I stumbled through the unusually crowded courtyard. My cheeks were black with running makeup and I was hyperventilating conspicuously. After a lot of guesswork, I hit the correct button in the elevator, managed to unlock my door blindly, and doused myself in milk. I went to my next class with utterly bloodshot eyes, sans makeup.

See? This is just stupid. I'm pretty sure I got a bigger blast of mace in the face than the guy who caused all the trouble to begin with. Let's take a look at my artistic flower arranging to lighten the mood. 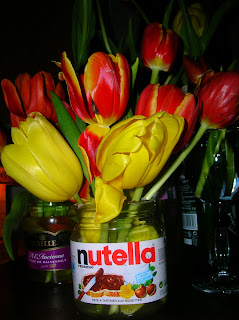 A roommate found several bouquets of tulips being thrown out, salvaged them, and I arranged them in other people's liquor bottles and-- my personal favorite-- accumulated Nutella jars. It's an excellent demonstration of how ghetto my life is now. We don't buy flowers; we have them fished out of the trash. We don't own a vase; we use our ever-growing stash of Nutella jars (among other things).

I say all this, but aside from the afore-mentioned disaster, I can't complain.
Posted by JayJay the Bunny at 6:12 PM No comments: 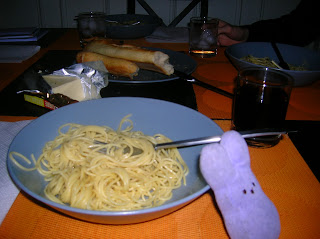 Our first meal at the apartment. This is probably also the first meal I've made completely without the use of a microwave. Apparently, they're too expensive to have. So that begs the question: what in the world is costing so much in this apartment? The heat only works some of the time, we run out of hot water after one and a half showers, we have no microwave or TV, and we're in the sketchiest area of town. But hey, we're dirt poor. My roommates and I eat bread, cheese and butter for dinner almost every night-- rarely anything else. 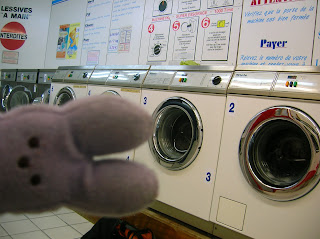 Let's be honest: it shouldn't cost over 10 euros to wash clothes. And yet....
This city is determined to send me to the poor house. 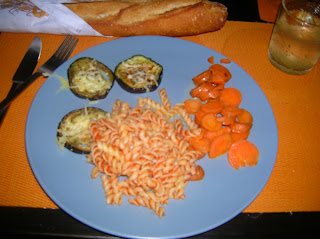 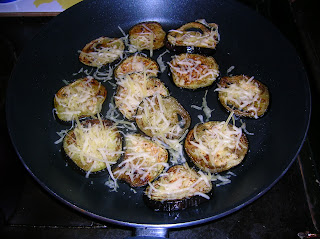 Clearly, I'm not the most talented person in domestic tasks. So I had to give myself props when I helped make the most complicated meal I've ever attempted: eggplant parmesan. 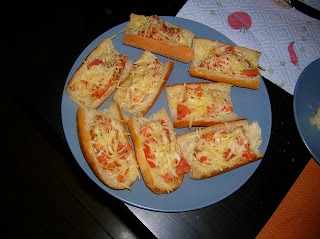 Then we branched out again and made a very successful bruschetta!
Posted by JayJay the Bunny at 9:56 AM No comments: 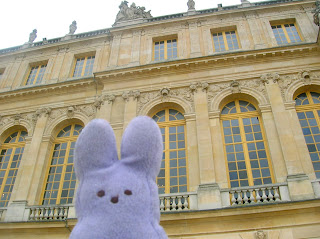 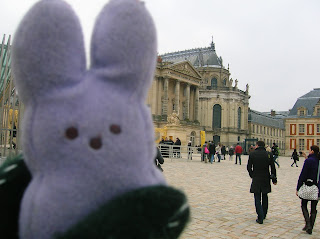 My future home, because I deserve it.

I also now intend to dip every one of my possessions in gold. For a classy touch.
Posted by JayJay the Bunny at 4:32 PM No comments: 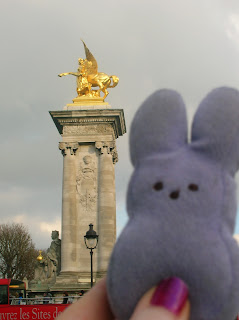 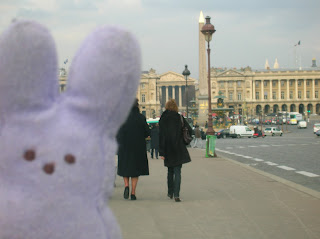 Getting lost can prove so useful. I was just trying to get home from class, but....
Posted by JayJay the Bunny at 5:54 PM No comments:

JayJay the Bunny
My name is JayJay, the traveling bunny. I currently live in Paris, where I'm studying-- what else?-- French.